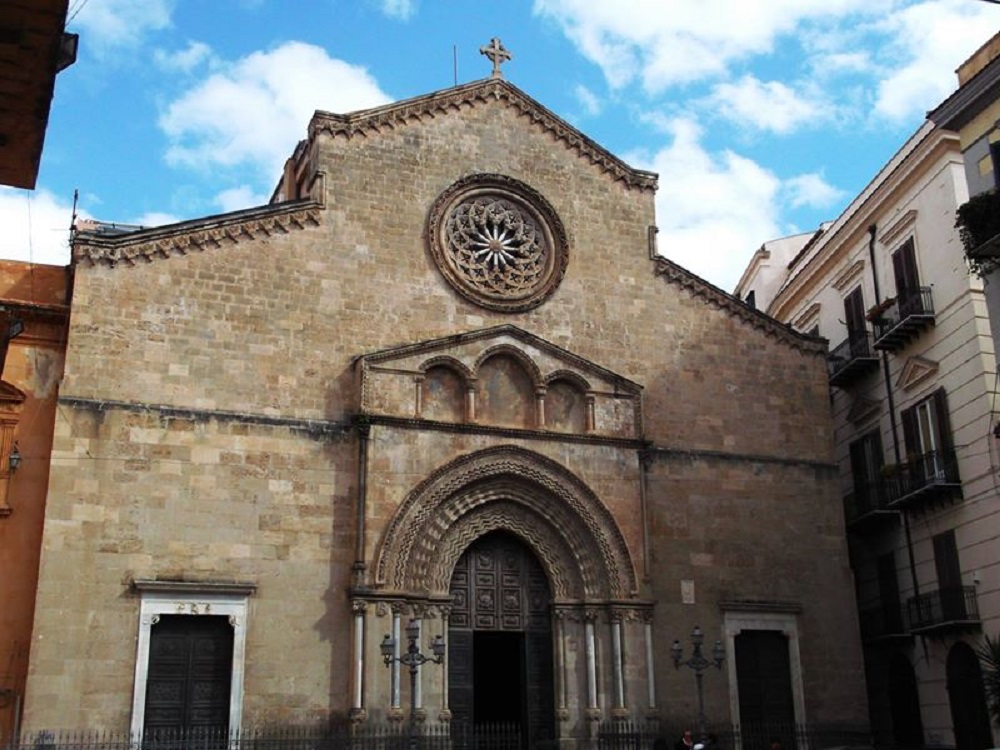 The construction began in 1254, on the remains of a previous church destroyed in 1240 by the Emperor Federico II, and ended around 1277. The most intact part of the church is certainly its superb late-Romanesque façade, notable for its his compositional balance, remained almost unharmed by remaking of successive epochs. Adorned by a magnificent fourteenth-century portal where the whole movement of the façade is concentrated and where the insignia of the powerful Chiaramonte family still stand. Above the portal the frame of the ogival arch widens, whose zig-zag motifs, deriving from Islamic art, have been compared to “concentric waves which, in a rippled sea, widen in solemn semicircles”. The precious rosette completes the façade. Destroyed by an earthquake in 1823, it was masterfully reconstructed by the architect Patricolo in the late nineteenth century on the example of the church of St. Augustine. The planimetric layout was very similar to the current one, but the original church lacked chapels and had on the external walls of the side aisles a series of sixteen magnificent two-light gothic style windows, of which some traces remain. From the first half of the fourteenth century the first chapels in the Chiaramonte style were built, with lava stone inlays on the gray tuff. Starting from the fifteenth century, others were added in Renaissance style. The most beautiful is undoubtedly the “Mastrantonio Chapel” (1468-1470) by Francesco Laurana and Pietro da Bonitade, which marks the introduction of Renaissance forms in Sicilian art. Also in the same century the first initiator of the Renaissance in Palermo, Domenico Gagini, realized on commission of the magistrate Pietro Speciale, the splendid funeral monument of his only son, Nicolò Antonio. But every century has left its mark in the Franciscan temple. In the seventeenth century it was enriched with stuccowork, precious frescoes and especially the wonderful Chapel of the Immaculate Conception, one of the most representative works of baroque in Palermo, with its sumptuous decoration of polychrome mixed marbles. In the following century Giacomo Serpotta, the greatest stuccatore of Sicily, created for the church a series of female allegorical figures, full of refined grace and elegance.

The church of Saint Francis of Assisi has an important role in the religious life of Palermo: in fact, in this church is enshrined the Simulacrum of the Immaculate Conception that every year, on the evening of December 8th, pass through the streets of the historic center among thousands of believers who accompany the procession till San Domenico Square.

Shocked in 1823 by an earthquake, the thirteenth-century basilica was reborn with neoclassical dress. In the second half of the same century the need was felt to return the church to the purity of its original forms, but the disastrous bombardments of the Second World War still pierced the old basilica. The reconstruction seemed impossible, but the love and tenacity of the Franciscan fathers once again raised their temple, simpler and more naked, more similar to the ancient yet still so rich in priceless works of art accumulated through the many centuries of life of this splendid monument.