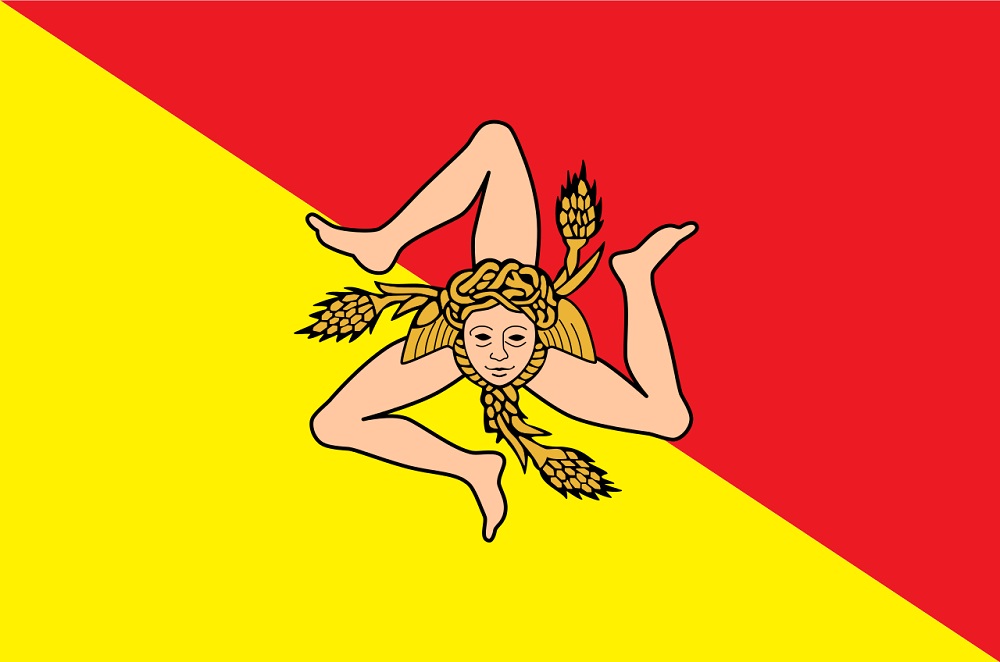 The flag appears for the first time during the “Revolution of the Vespers” in 1282, but with a substantial difference comparing to the present one: the two colors of the flag – yellow and red – were reversed, undergoing several changes over the centuries. Only in 2000 when it was recognized as the official flag of the Sicilian Region, the symbol of trinacria appeared on a yellow and red background.

Yellow, a gold color, could indicate the wheat of Sicily or the light of its sun that shines on it. Red symbolizes the blood shed by the Sicilians during the Sicilian Vespers.

31st March 1282. People gathered in the Church of the Holy Spirit to celebrate the function of the Vespers. A French Army soldier outrages a young noblewoman putting his hands on her with the pretext of searching. In the meantime her partner decides to intervene, subtracting the sword to the soldier and killing him. Since that moment, the revolt began, a true “hunt to the French” which spread quickly throughout the island, turning into a massacre.

A few days later the representatives of Palermo and Corleone confederation, the first cities to rebel against the Angevin domination, adopted this flag: Palermo chose red and Corleone yellow. Since that moment the chromatic birth of the flag with the inscription “Antudo!”, password used by the anti-French rebels and derived from the acronym of the Latin motto Animus Tuus Dominus (“Courage is your Lord”).

It is said that the Sicilians used a  linguistic stratagem to identify the Frenches camouflaged among the common people, showing them chickpeas ( “ciciri», in Sicilian dialect) and asking them to pronounce the name: those who were betrayed by their French pronunciation (sciscirì) were immediately killed.

The rebellion ended definitively with the Treaty of Avignon in 1372, which decreed the separation between the Kingdom of Naples and Sicily, followed by their reunification in 1816 under the total Bourbon control.